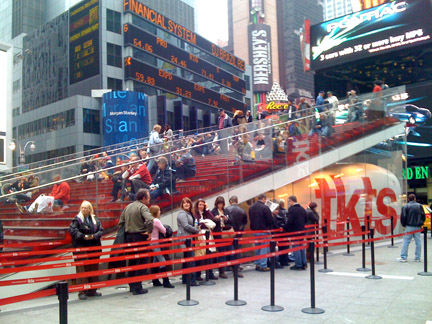 Every month MSLK has a meeting with the marketing managers of Redken Haircare. We meet to review the upcoming promotions to be featured in New On 5th, the Dealsheet we’ve been designing for just over four years now.

The subway lets me out on Broadway, right in the heart of Times Square, amid the theatergoers, tourists, souvenir salesmen, and never-ending construction sites. Hardly anything worth noting, as  jaded New Yorkers make their way from point A to point B. I’ve made this trip so many times that I can practically do it blindfolded.

Yet, this past Friday while on my way to another meeting, something stopped me in my tracks. No longer was there a generic construction barricade in my way. In its place was something incredibly large, red and white: the newly renovated “tkts” booth  — even more modern than the classic booth I had remembered as a kid.

It seemed to have popped up in the month since my last meeting.

Though it appeared to me to have just popped up, it’s been a long time in the making (eight years and nine times the original budget!). For those unfamiliar with this famed institution, the tkts booth opened in Duffy Square in 1973 and has always been the place to grab great deals on day-of-performance tickets.

The original design was an exercise in true Modernism: a bold sans serif typeface at an impossibly large size, to announce to all what you could buy there. Perfect for a city where time is of the essence.

The revamped design, with its modestly updated the typeface, adds an additional thrill of a massive 27-step glass staircase for all to use when time is not of the essence, and a break is what’s called for.

Once the weather warms up a bit I may decide to leave for my Redken meeting a bit early to enjoy some time on the steps.

Next Post NYC Soon to Pay for Plastic Bags? 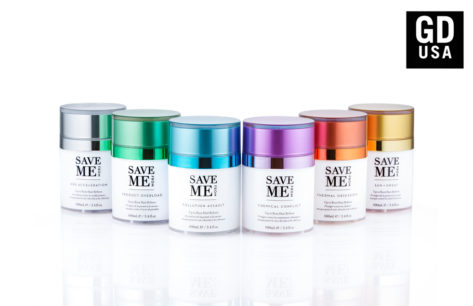 We are incredibly honored to announce that MSLK has been awarded two American Packaging Design Awards from Graphic Design USA!…
Read More

Mark your calendars, there are now four chances to catch MSLK partner and Chief Strategist, Sheri L Koetting, as she discusses…
Read More