Not Sure How I Feel About the New, New Museum 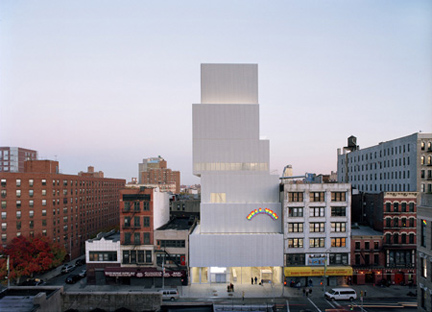 One thing I know is that I’m not encouraging anyone to rush off and see the museum’s inaugural exhibit, Unmonumental: The Object in the 21st Century. I found the work in the show to be a bit too, well, unmonumental for my taste and, as a modern art enthusiast, my taste is quite liberal.

All I ask is that before something be considered “modern art” it offer up just one thing as its shining star. One clever idea, one clever statement, or application of one skill (such as painting, welding, weaving, obsessive collecting, intense cutting — whatever skill the artist fancies). If a piece cannot excel in any one of those three areas then…it really shouldn’t be upheld as a testament of anything. 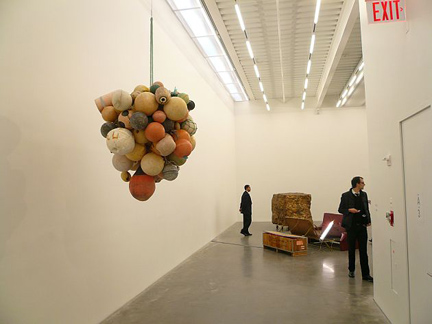 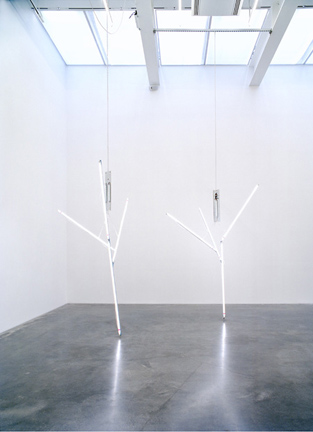 Don’t get me wrong, there were some highlights that delivered. There was a sculpture of water buoys with the most beautiful color palette of warm oranges, browns, and pinks. There were also some neon “trees,” a photo/word commentary on the stages of intoxication and the Bowery, and a beautiful, fragile paper sculpture held together with only paper, glue, and sticks. Yet, those shining stars were few and far between.

The rest of the work was so pedestrian—aimed to embrace the public and say “everything around you can be art” to such an extent that they lost me. My mom, Marc, and others around us found ourselves asking, “with so many talented and unrecognized artists (in NYC alone)… why choose to exhibit these pieces?” 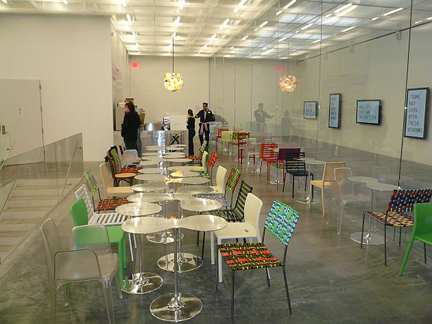 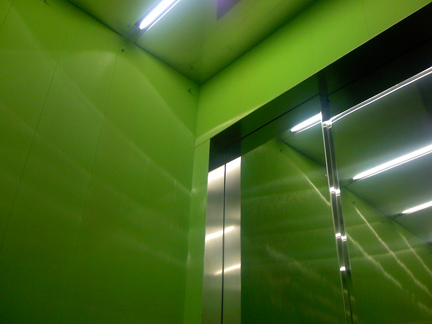 You could say that the building itself was the star of the show, and you may just be right. The exterior is amazing. The lobby is beautiful. The café was charming with its mismatched chairs covered in repurposed ropes and vinyl. The elevator was exciting in fluted green plastic, and the bathrooms were outstanding with their tiny mosaic tiles rendered in rasterized supergraphics of flowers set at a low resolution. 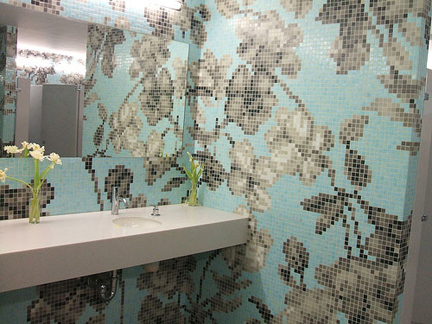 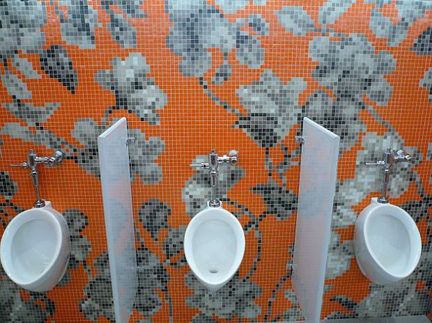 However, I suspect the architects, Kazuyo Sejima and Ryue Nishizawa of Japan-based SANAA, might not have much experience building in the US. Their first stateside building was just completed last year in Ohio, and perhaps they didn’t have time to incorporate their discoveries from that into the New Museum’s plans which were already well underway. The building has some clear traffic problems with only one main elevator to transport visitors through the 5 floors of exhibits.

Although we discovered a smaller side elevator and the fire stairwell, we witnessed several fights over long lines to move from floor to floor and found the stairwells to be tight and steep. Clearly, the museum was not designed to accommodate crowds of large Americans. Perhaps it would be more suited to smaller, more polite, Japanese visitors.

All in all, I am glad to have the New Museum back in town. I look forward to what is next and I cannot wait for good things to come. I’m just not sure if this first exhibit demonstrates the bang of cutting edge inspiration I was anticipating.

There’s Something About Louis.

A few months back, Sheri wrote about copyright infringement in an earlier post, and cited one particular case where Microsoft…
Read More 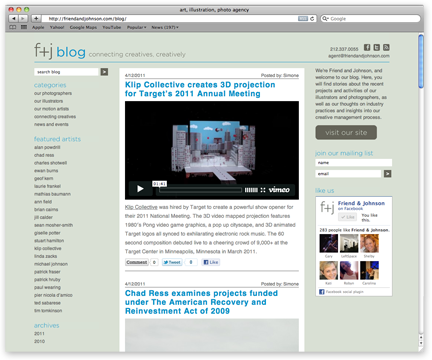