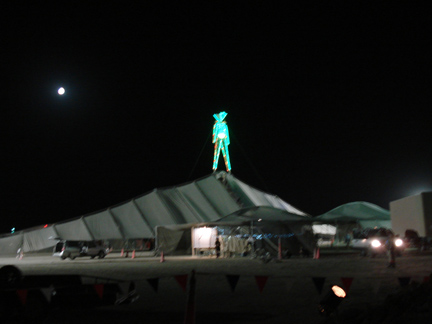 The Burning Man festival is where one can find emerging art, fashion, music, survival gear, etc. This is why we were particularly excited last September when 2007’s theme would be “The Green Man.” Burning Man isn’t normally a particularly green event, but with carbon footprints on everyone’s mind, it seemed inevitable that eco-consciousness would make its way out to the playa. Sadly even with a guideline to ponder visions of a green future, the visionaries had little to offer. If this was the latest and greatest that could be produced, I am even more concerned about how much further we have to go. It seems to me that we may have more greenwashing then we actually have people taking actions that make a difference.

Everyone seems to have heard of the Man burning on Monday due to arson. As a result, the pavilion beneath the Man which contained information from eco-friendly companies as well as other green projects and studies remained off limits for most of the week while the Man was rebuilt. I’m certain if I had spent more time here I would of discovered a few nuggets of people really making a difference.
However, I was hoping to find a universal cry all across the playa for change. A grand statement. Voices in unison saying, “This is how exciting a green future could be.” Perhaps we are simply caught in limbo in the starting gate?
The people with grand ideas such as The Mechabolic: Cyborg Speculations in Machine Metabolism, which aimed to create a giant digestive system that would each garbage and gasify it into fuel, ended up way in over their heads as they tried to reinvent the system from the ground up.

Those making a lot of “noise” were Crude Awakening, a giant oil derrick which dripped fuel all week, shooting off fireworks for 20 minutes for spectacle, sending up the largest fireball ever seen on the playa, and finally burning to the ground. Was this really the best way to make a “statement” about our dependence on oil? A large, wasteful spectacle lacking in substance? 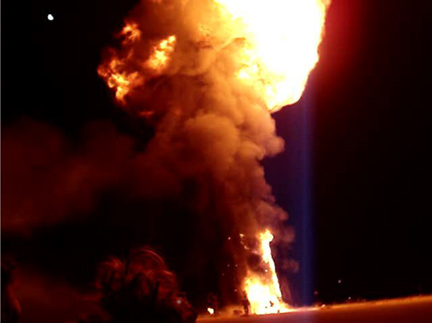 For the rest of us smart enough to know the difference, we simply struggled to figure out where to begin.

Next Post When the Name Does Not Speak for Itself

We just produced a short video about our environmental commitment. You can see it above, or on our fresh, new…
Read More

I came across this logo for Panama tourism in a magazine the other day. Does the colorful cluster of shapes…
Read More