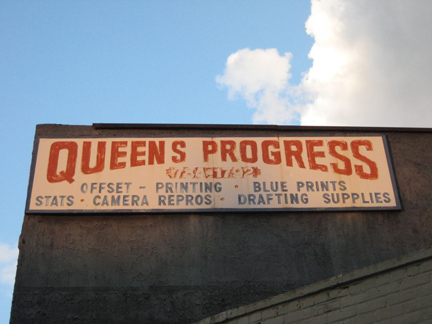 All the services offered on this vestige of a sign were in peril the day Apple Macintosh’s introduction back in 1984. The world of graphic design was forever changed, as it’s ease of use enabled designers to change the look of nearly everything you encounter — from ads to magazines, packaging, commercials, video, etc. It also allowed designers to take control of the tasks once entrusted to experts. (To all my designers out there: when was the last time you sent out for a “stat”?)

Designers — for better or worse — are in now complete control.

Many things have changed. Downtown Long Island City was once a place where printing services thrived. Now it’s a prime location for a new breed of designers who work out of the comfort of their luxury high-rises. To them “old school” hearkens back to the days of giant beige CPUs and “fiery outputs” rather than “blue prints and repros.” The whole notion of printing is beginning to feel a bit arcane in eco-conscious 2008.

I am reminded of these things as today marks the 10-year anniversary since Apple’s introduction of the iMac, an equally influential product which helped seal the deal on all-things-internet, as well as put the the final nail in the coffin for the once-ubiquitous floppy disk.

Here are some post-Labor Day happenings in the borough. 1. Act Green (re)Cycle Plays, 09.15.07 Artists will perform a series…
Read More

The website, Barack Obama Is Your New Bicycle has been popping up all around the blogosphere lately, and whether you…
Read More