Justification for the AIGA’s Justified Competition

If you are designer, you’ve probably already read Paula Scher’s opinion piece, “AIGA: Unjustified” in the online journal Imprint, decrying the AIGA‘s decision to forgo other competitions in favor of just one, “Justified.” It has generated an unprecedented amount of comments for the publication, and has polarized the design community. What you may not know is that my agency, MSLK, helped the AIGA in bringing Justified to life.

To clarify, the AIGA had already decided to host only one competition when they came to us. The competition would be an extension of last year’s “Making the Case” competition where work was evaluated not just as a beauty competition, but based on the case study and impact of the work created.

Our role was simply to bring light to the competition by promoting the value and benefits of entering and winning to designers and clients alike. We felt that the name and the promotion of the competition itself must establish some gravitas and the word “Justified” seemed to do just that. Finally, there was a place where great thinking and results beyond just graphics could receive merit and justification. “Get Justified” could become a phrase to aspire to. Contrary to Paula’s opinion, great, innovative design is still a part of that equation, too. The term justified has just as many connotations within design the design field.

Yet Paula is clearly asking for things to remain the same, rather than change. Not surprisingly, many of her contemporaries’ echoed similar sentiments in the comments that followed. I can’t blame them, since things were easier than they are today. Yet today’s designer — especially those who have not realized their full potential — faces a much different reality than designers in the past.

Can Work That’s Merely “Cool Looking” Be  Justifiable?
We at MSLK believe this is what separates design from art. Art can be purely inspiring without the need for any justification whatsoever. (“If you don’t get my art, well, you simply don’t get my art!”) However, design should communicate, resonate, and be effective in the task it was created for. In no way should this preclude it from being visually interesting — or even groundbreaking.

Designers, Then and Now
Paula came of age as a designer at a time when one needed to be practiced at your craft. Cutting rubylith, spec’ing type, adept draftsmanship: these were not easy skills for a novice to come by. Yet the prevalence of today’s personal computer along with readily-available sophisticated software has had a profound impact on ALL creative professionals resulting in a perceived democratization of the creative process.

The positives are very easy to see: now everyone with a Mac can be a writer, musician, photographer, moviemaker, and designer. The big negative of this democratization is a large majority of clients feel as though their familiarity with tools of the trade (namely software) counts as a complete understanding of the creative’s process. This fallacy totally discounts the years of training (and perhaps even innate talent) that designers have gone through to become practitioners.

Aesthetics vs. Effectiveness
This seismic shift in society’s perception of design is reason enough for a 100-year old organization to want to change with the times. Yet, the computer is only one factor in the equation. Paula’s points are well-taken, yet her arguments are not sustainable. The reality is that today’s designer’s cannot survive by creativity alone. Passion, drive, talent, and hard work alone is not a point of difference anymore. Doing “Great Work” should not be seen as the end goal, it should be seen as the given.

What separates the good from the great designers today is whose work is relevant. Who can innovate, yet make a living. Who can lead clients to great solutions while wowing their peers. Which designers who market themselves as problem solvers are actually solving problems? These are measures of design’s effectiveness.

Today’s Designer Must Justify Their Existence Amid:

• the digital democratization of design

• a litigious society where tight contracts have replaced handshakes

• fewer opportunities for studios to earn income on the handling and supervision of printing, photography, comps, etc

I mean not to paint too sanguine a view of the design profession from 1970s onwards. As a third-generation graphic designer, I am well aware of many long recessions throughout my family had to contend with. Yet, when one considers the list of today’s challenges above, re-read Paula’s article and ask yourself whether she’s accounted for  all of these factors. Do you feel she’s looking out for today’s generation, or merely yesterday’s generation?

Justifiably So
As an owner of a small studio, we grapple with these issues on a daily basis is the environment in which great work must rise above. Personally, I feel that it’s perfectly justifiable to have a design competition which takes these factors into account.

Paula’s main thesis is that this competition will breed sub-par, yet well-argued work. I’d rather have her make that comment after the judges have had their say. I can’t imagine why submitting rationale behind the creative hurt.

Next Post A New Installation of Watershed, Created by School Children 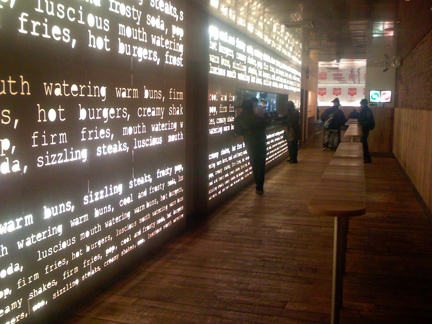 A while back we were having an intense debate in the studio about the best burger in NYC. It became…
Read More

MSLK.com Featured in How Magazine Self Promotion Issue

Our website, www.mslk.com, is cited in the current issue of How Magazine in an article entitled, “The Marketing-Smart Website” written…
Read More